The Trumpalooka Crew stands before us, in flagrante delicto, exposing all for our perusal.

In fact, the whole course of events gives him that puerile giggle he's always cherished.

He has almost accomplished his mission.

Toy with the courts...skate away clean...hmmmm...still working on that one! 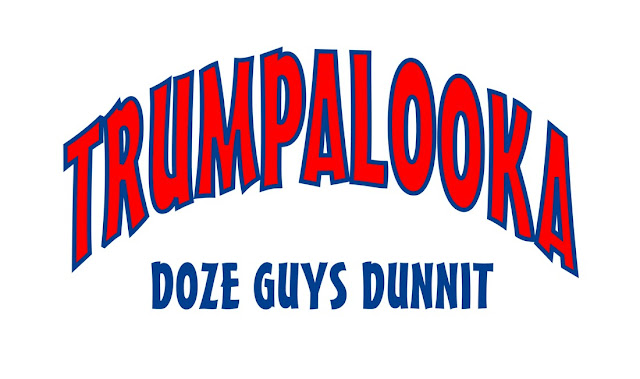 He wonders if all those who made promises will come through.

Quid Pro Quo is a two way street, he hopes.

That said, if all else fails, I'm sure he can get a morning radio show as DJ Trumpalooka, The New King Of All Media.

Howard Stern would concede the title, and become a favorite guest.

C'mon, Trumpalooka won that game hands down, give him credit.


He’s on roller skates, dressed in a clown suit like Bozo or Ronald McDonald, making his way around a Walmart parking lot, promoting his morning zoo.

His rainbow patterned, spandex unitard, topped with a flouncing pink neck ruffle, is a stunning sight to behold.

My vision is of Tweedledum or Tweedle Dee, morphed with one of those Joe Palooka punching bag dolls that wobble on a rounded base.

Sometimes down, but never out, Trumpalooka always pops back up.

The Joe Palooka blow up doll image is better if you see it as way over inflated, ready to burst at the slightest pinprick.

Let yourself imagine Trump’s existing hairdo, styled like Bozo, and returned to the orange color he sported for so long, before switching to the more presidential ash blonde tone currently in use.

That’s our representative to the world.

The mechanism has no way to get rid of him, unless he resigns.

"Trumpalooka" is an ongoing saga, happening in real time.

The apple cart has been upset, and ya can't put Humpty together again.

This is gonna get hairy.

Every second becomes a mad scramble, trying to keep all the balls in the air at once.

Then ya gotta fit in communicating over your gadget.

The bird that just flew over must be as important to the internet as it is to you.

Every cat is the Elvis of cats, mothered, smothered, omnipotent, and weird.

One of the balls is out of synch.

Wonder if the gadget has an app for that?

Best of luck in the future.

Ever since Ringling Brothers folded their tent, The Donald has become "The Greatest Show On Earth!"

I wonder if POTUS has called Howard Stern, claiming the title of "NEW King Of All Media".

Let's face it, this guy is the most famous, most powerful clown alive today.

Forget about Trump's inability as POTUS, that's a misdirectional farce.

He is winning big time at the game of his choice.

If all goes according to plan, the tallest building on Earth will soon be erected in Dubai, or Abu Dhabi.

When completed, it will have a huge, red, white, and blue, rotating neon sign saying TRUMP atop the spire.

Mega rich, ultimately powerful, and the most awesome force ever to hit the world of entertainment.

News programming has its highest ratings ever.

Trump's exploits have hit that magic spot in the collective psyche.

His every random brain spasm is consumed, analyzed, and evaluated for hidden content, keeping us all on the edge of our seats.

Ever since POTUS started announcing FOX to be his favorite network on a nightly basis, FOX stock has gone from right around $20 to over $30, tangible proof of his media clout, and quite a return for ol' Rupert in less than a year.

Why isn't that a crime?

The Donald has the world's worst case of  'make the other person wrong at all cost'.

It is the core of his character.

He has no qualms or second thoughts.

His ability to delude himself is unbounded.

He has the narrowly focused glare of a zealot when things get heated.

The leader of the free world is getting away with it right before our eyes and we are transfixed.

The delusional Donald is smart, rich, nice, delightfully charming, yet still the kinda guy you'd like to have a drink with, one of the boys.

When he sticks his foot in his mouth with events like bragging about grab ass to the reporter, it's because he wants the guy to like him, and has the reporter psyched as the type who would be impressed.

Always on the make.

Trump's Achille's heel is his never ending yearning to be loved.

He'd trade richest, most powerful, and most famous for most loved.

POTUS is genuinely surprised that his firing of Comey didn't have Democrats dancing in the streets.

His instincts do not suit politics.

While it may appear that he's a novice, getting his feet wet while learning from his mistakes, the reality is, no thought of adapting to the art of compromise will ever exist in POTUS mind.

If this man remains POTUS, we will adapt to him and his ways.

Give Trump another six months and chaos in The White House will be the least of our daily concerns.

As long as he continues to stay ahead of charges against him, and everything slips off his back, only to be lost in his prodigiously churning wake, he will not slow down.

The potential directions he could steer the ship of state are staggering to consider.

It's obvious from his responses thus far that he will escalate the blathering fog into a threatening maelstrom on a whim.

As the pressure mounts, the fractures in Trump's character will deepen, and the wacky responses will intensify.

Our guy has never been rebuked, and now it's happening on the world stage.

Snickering can be heard.

Trump needs to learn that his job description is "glad handing frontman".

He's like a casino greeter, or carnival shill, while the real business takes place behind the curtain.

Picture him getting down with 'his people', doing surprise appearances at Walmart, shaking hands and steering folks in the right direction.

He'd love that job, and we'd all sleep much better.

I wish Rodney Dangerfield was still around.

Plus his lips would be obscenely funny as Trumpalooka.

I can see that little pout on Rodney's lips, as he goggles his eyes every which way.

Trumpalooka's character has taken over.

Donald J Trump, or TRUMP, as he calls himself, is a world class swinging dick, playin' hardball with the big boys, and, for now, he's winnin' the pissin' contest big time.

His character, the one I call Trumpalooka, is much stronger than Don Trump could ever hope to be.

This guy is POTUS, and he has fans to please.

Don Trump would have realised the destruction he is bringing on himself, his family, and associates before now, and found some sleazy way to escape.

Trumpalooka's gotta carry on with swagger.

It's in his character.

I wish he drank, so he could get all maudlin, and have a Joe McCarthy moment, complete with a paean to Roy Cohn.

I picture him behind a couple of bottles of some fine red wine, his belly full of Big Macs, re-telling the sad tale he spun to the Boy Scouts about the guy who lost it all, except he's whimpery and forelorn.

It's all about him.

Can you imagine that?

It sustains me in a lot of ways.

Tales will be told of the short, twisted reign of Donald J. Trump.

Once upon a time, a bloated, ego driven, billionaire businessman promoted himself to President of The United States of America.

Even Trump himself was amazed when it actually worked and he found himself sitting in The White House.

Trump entertained himself, toying with the pure joy of power, but he really craved love and admiration.

This drove him to appeal directly to the public, hoping to feel the flow of love streaming his way.

His enormous sense of self was there for all to see.

What he felt flowing his way was derision and pure hatred.

His dealings became public, daily fodder for the masses.

It did not go well.

Fractured by the onslaught of negativity and impoverished from the overwhelming legal fees he faced after his dealings became public knowledge, Trump, disheveled and wearing only a dirty white robe, was finally escorted from The White House and delivered to Moscow, penniless.

Back in private life, his appeal to the public no longer played, his contacts disappeared, and his yearning for fame and glory led him down numerous blind alleys.

Trump's descent was rapid, to say the least.

In the end, he was nothing more than a blimp on the screen.

That's what our guy really wants.

He's doing pretty good at it so far.

TRUMP tower is all over the news every day.

Think of how it would deflate him if every reference was to POTUS, never TRUMP.

POTUS can be inflected into a pretty disgusting sounding word.

Plus, he'd be forced to decide if he'd rather be TRUMP, or POTUS.

No both ways on this one.

GOTTA NOTICE POTUS
a little ditty to wrap things up

THERE ONCE WAS A MAN NAMED POTUS

WHO YA COULDN’T HELP BUT NOTICE

HE HUFFED AND PUFFED AND STRUTTED

‘TIL HIS BLOATED HEAD EXPLODED

POTUS WE LOVED YOU

NOW HE’S GONE BUT NOT FORGOTTEN

‘CAUSE HE LEFT A STENCH THAT’S ROTTEN

YOU CAN SMELL IT OVERSEAS

ALL KFC AND MICKEY D’S

POTUS WE LOVED YOU